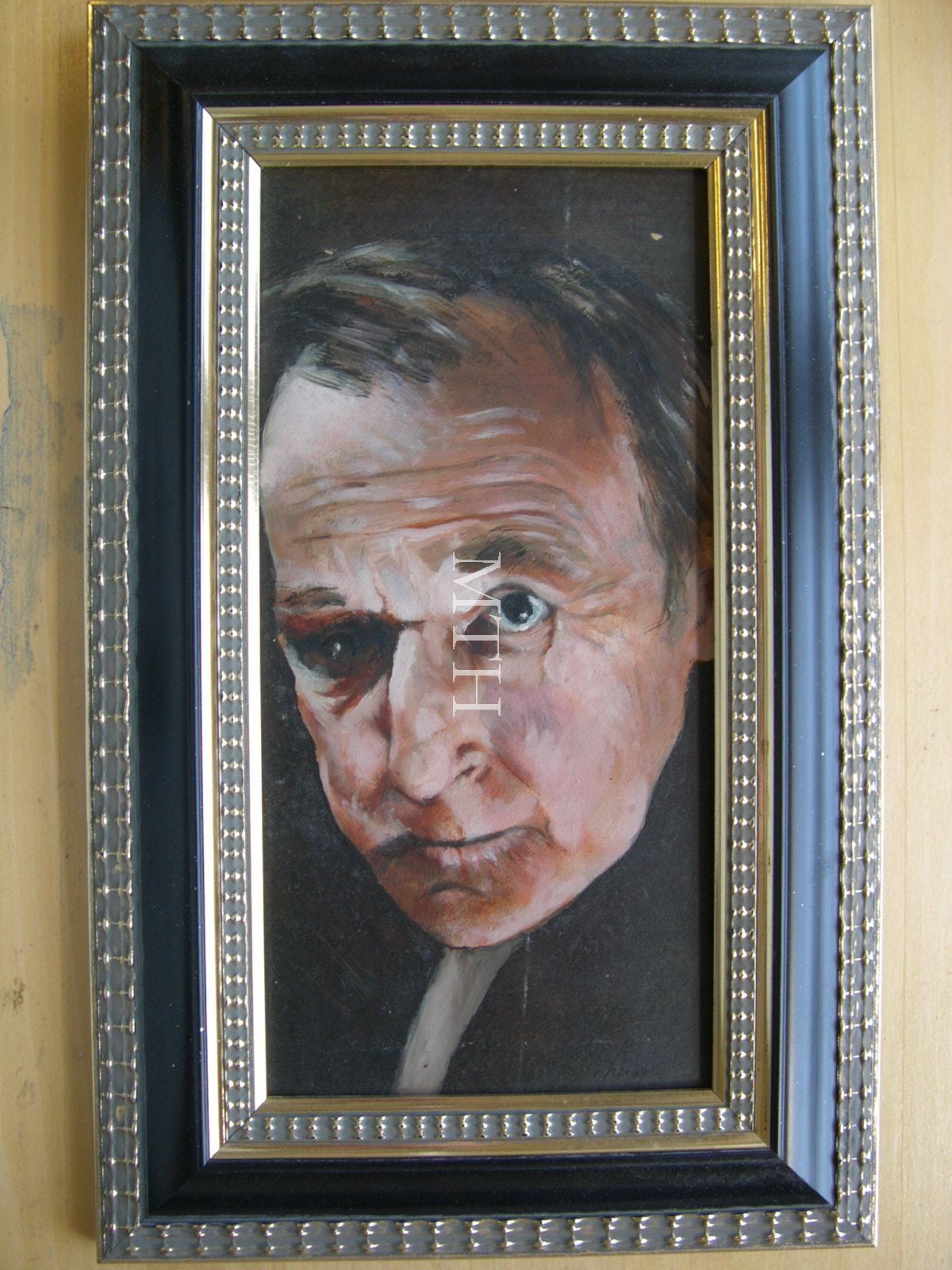 This is a portrait of the conductor Charles Munch 1891-1968. French conductor and violinist best known for leading the Boston Symphony Orchestra as its music director. Mary painted this polished portrait on a confined board space. The effect when framed is to call the viewers attention directly to the face which peers out at us. Note her accenting of the eye of the conductor. The use of a black background accents the way the portrait jumps out at us. Mary's use of light and shadow in this piece is very effective as well. The mood of the piece is somber, but with a hidden something in the eye. The eye becomes a window to the soul of the conductor. The other eye is in shadow. 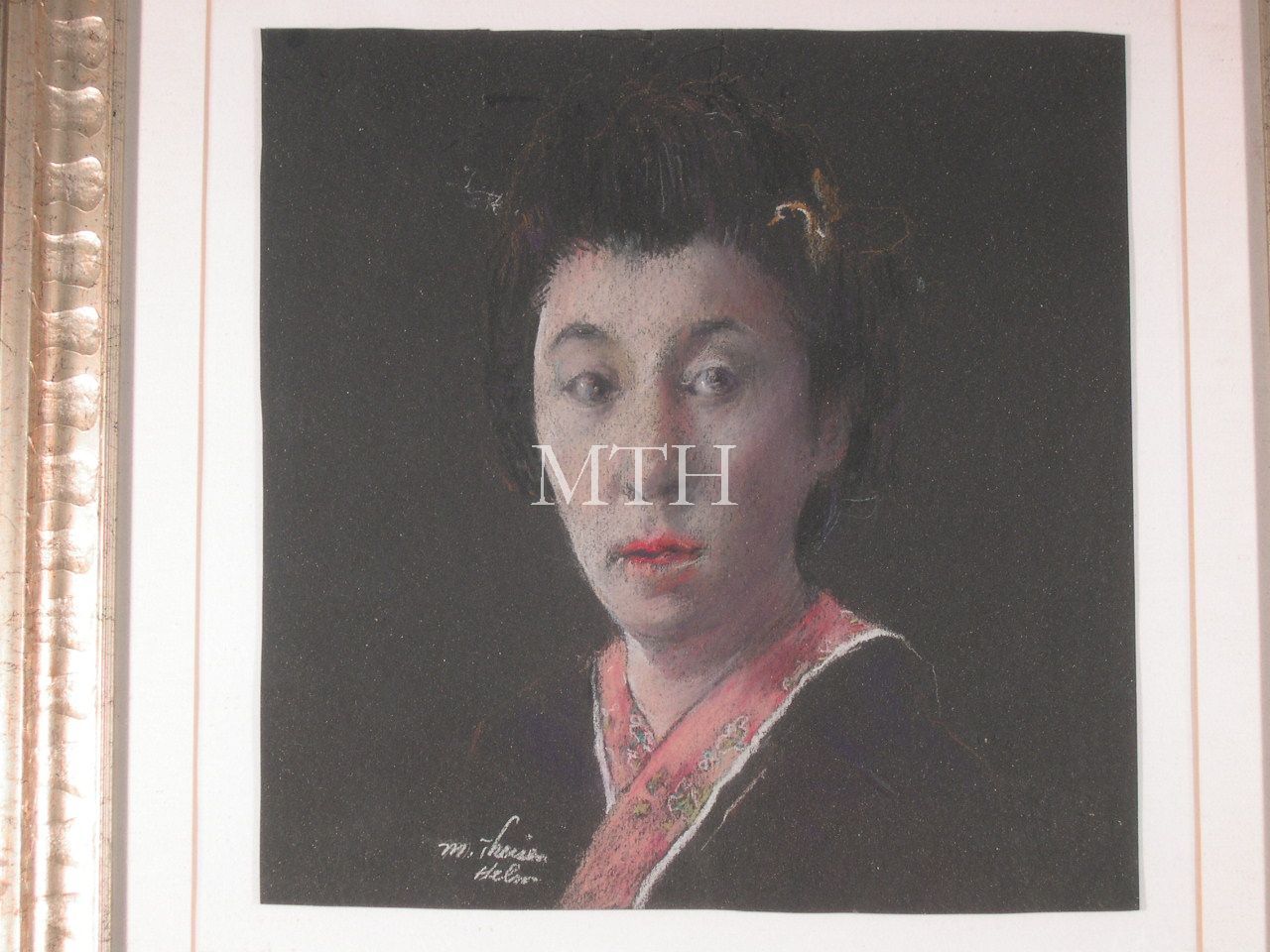 This work was completed a year or so before Mary's death. It is a pastel on black paper. The subject is the face of a Japanese Geisha. It is a simple work and not over embellished. Note how the black hair of the woman is neatly framed with highlights. 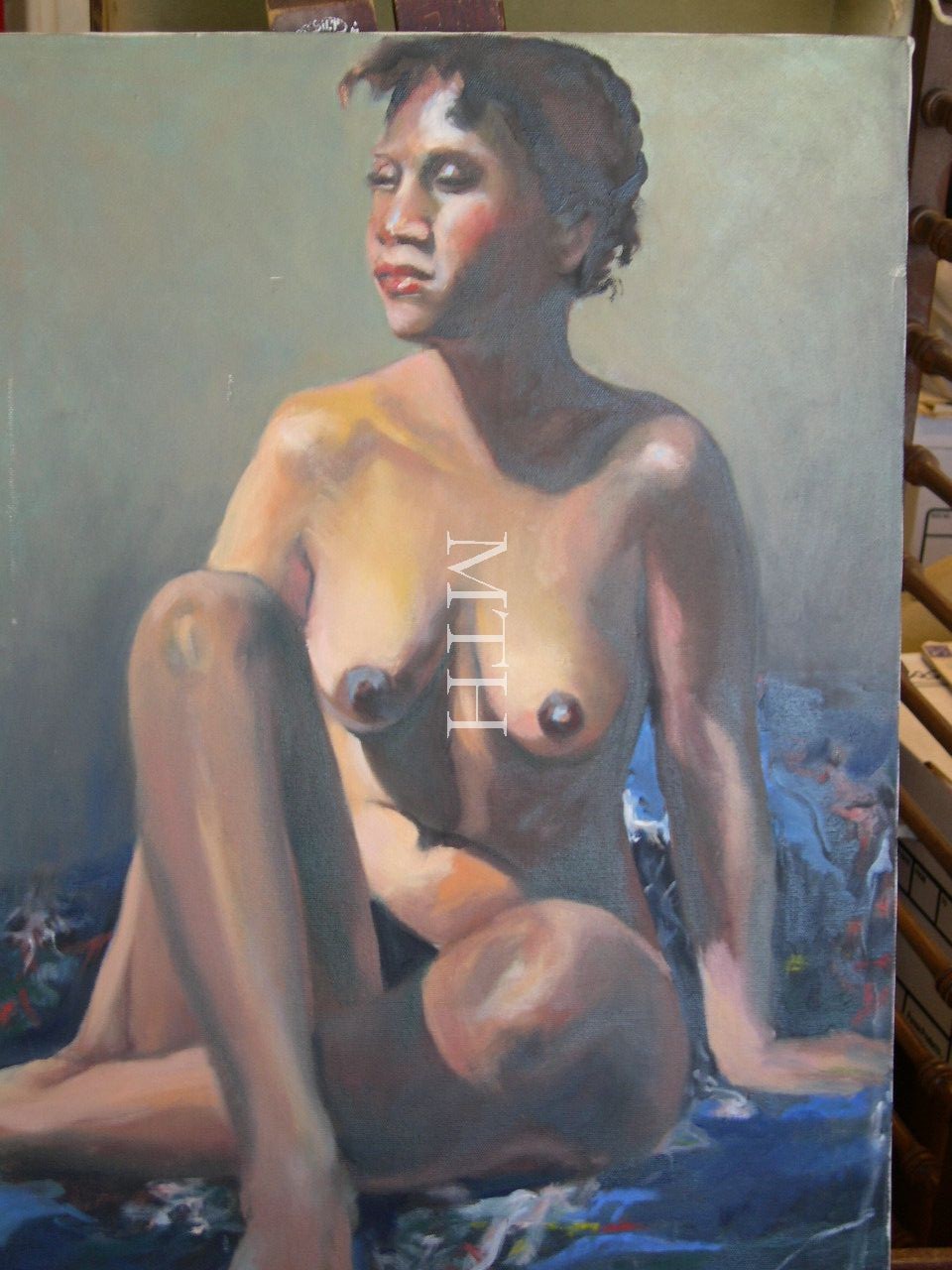 I chose this piece to show how Mary could portray the human form in figure study from a pose of an hour. This work along with most of the nude figure studies were done at the University of Wisconsin Milwaukee Friday night drawing sessions. Again Mary uses light and shadow to great extent. The focus of the piece is the body, not the background or setting which is just hinted at for offsetting effect. The human form is a thing of beauty as treated here without any hesitation or need to add meaning. 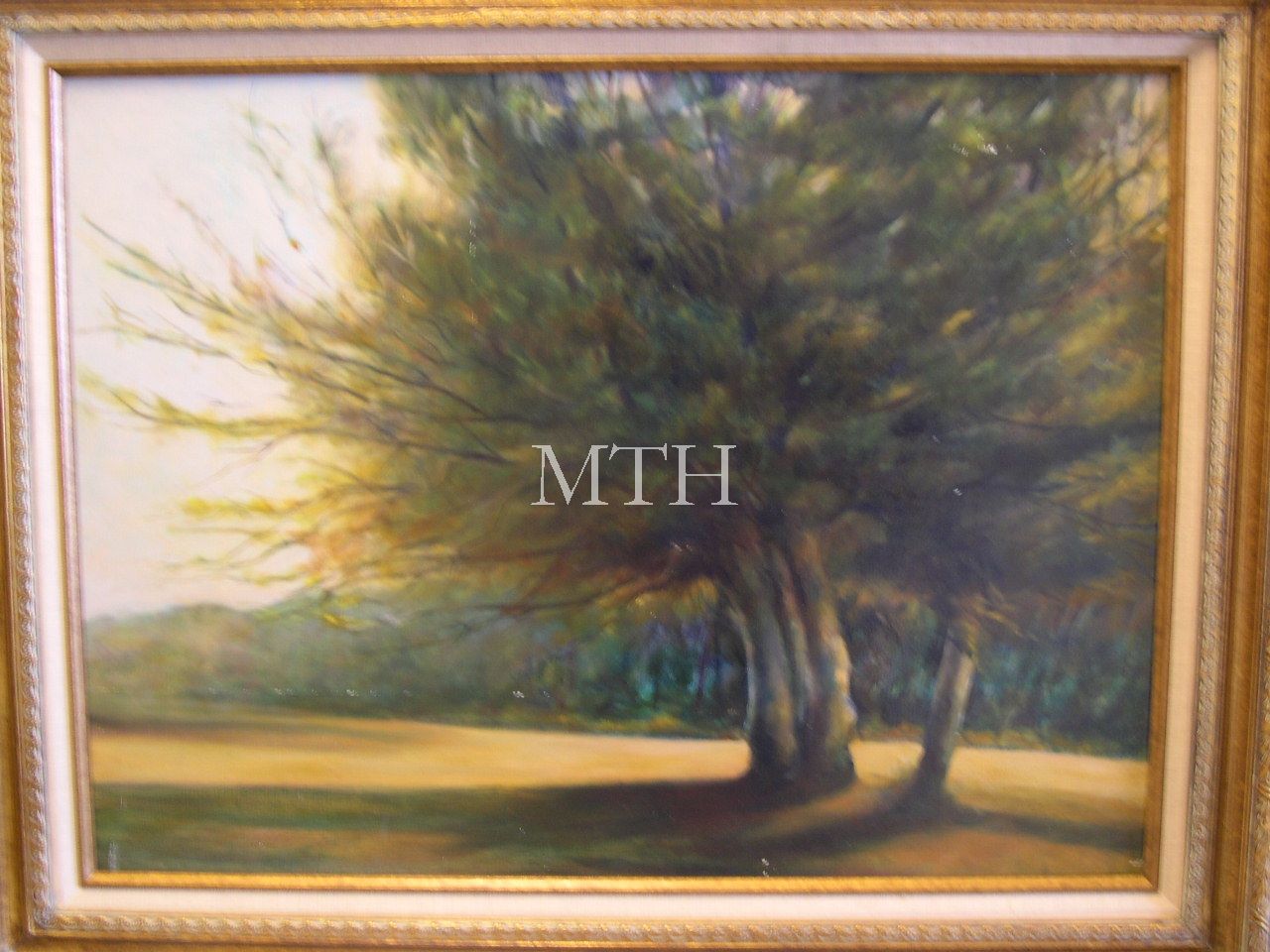 This oil of a beach tree reminds me of an explosion of leaves. The photo does not do justice to the rich treatment of the subject. The bark of the tree looks alive, and one is almost invited to touch it. Mary chose subject matter because she saw moods in them. She didn't just paint a tree, rather the tree spoke to her of a mood, an emotion or something else which had to be captured. 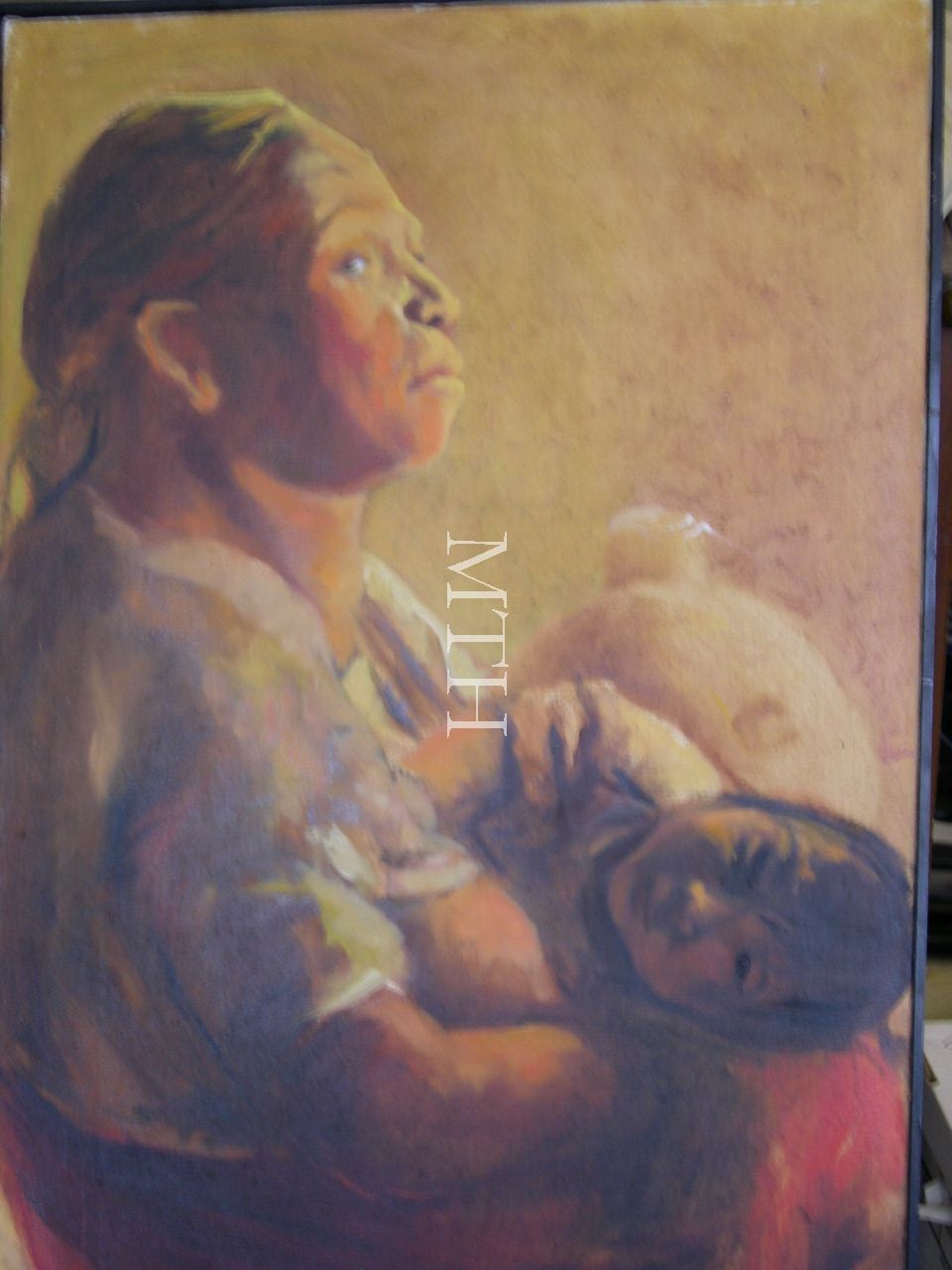 Here we have an oil painting of a woman and child. The woman seems to have just become aware of the observer as her eye is trained on us. She exhibits a mood of protection. The child is looking directly at us. The child was just being fed. The lighting suggests a single light bulb or similar light source. The ethnicity seems to be Central American or Mexican. 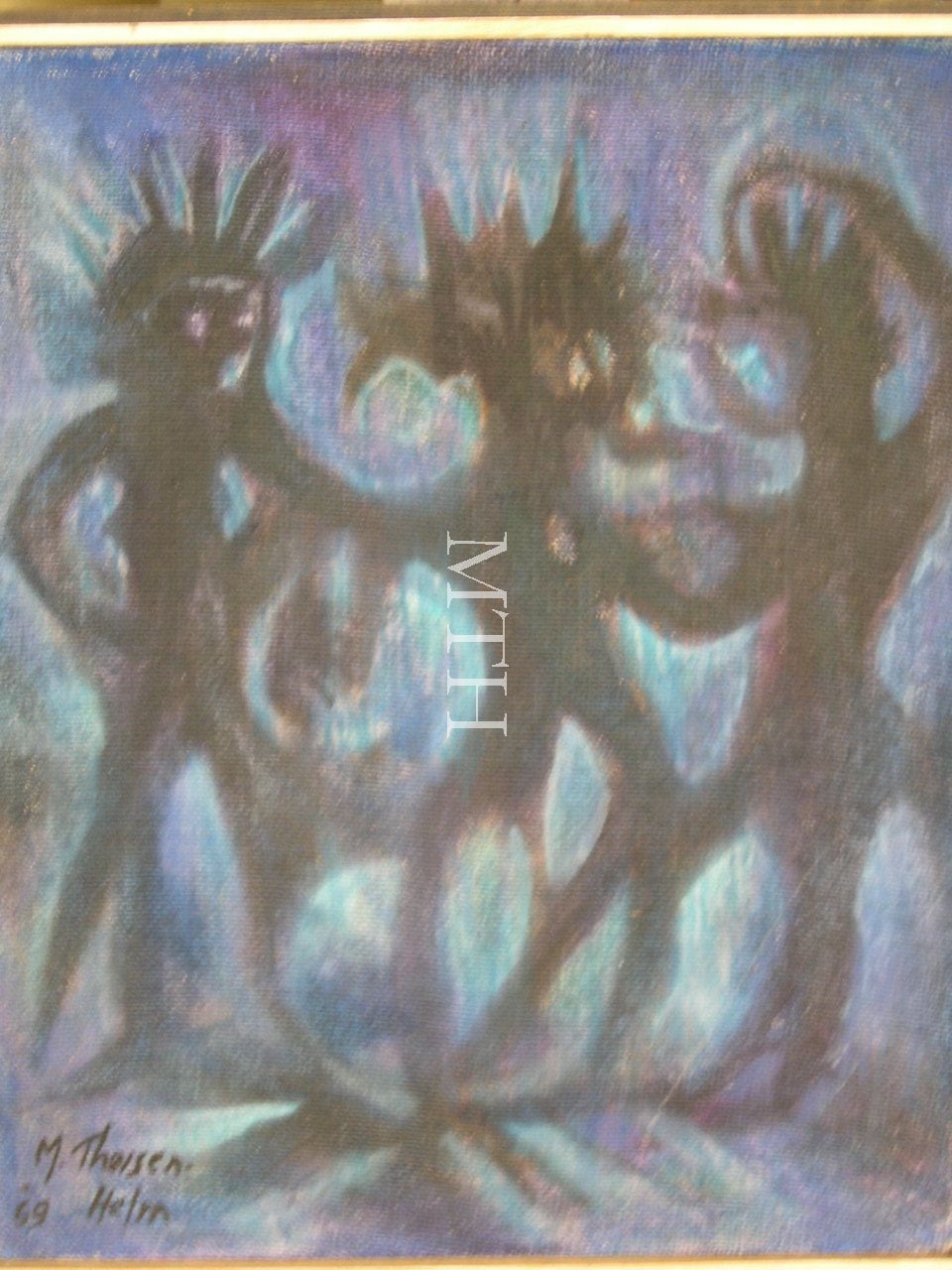 This abstract oil shows light and motion. The figures wear costume head dresses and are moving in a dance. Light both illuminates them and emanates from them. The feet almost suggest hooves. The whole piece has a mythic sort of quality about it. This piece dates from my favorite period of her Mary's work; roughly 1968-1973. Many abstract works which are very successful and speak of the freedom that her works enjoy date to this period. 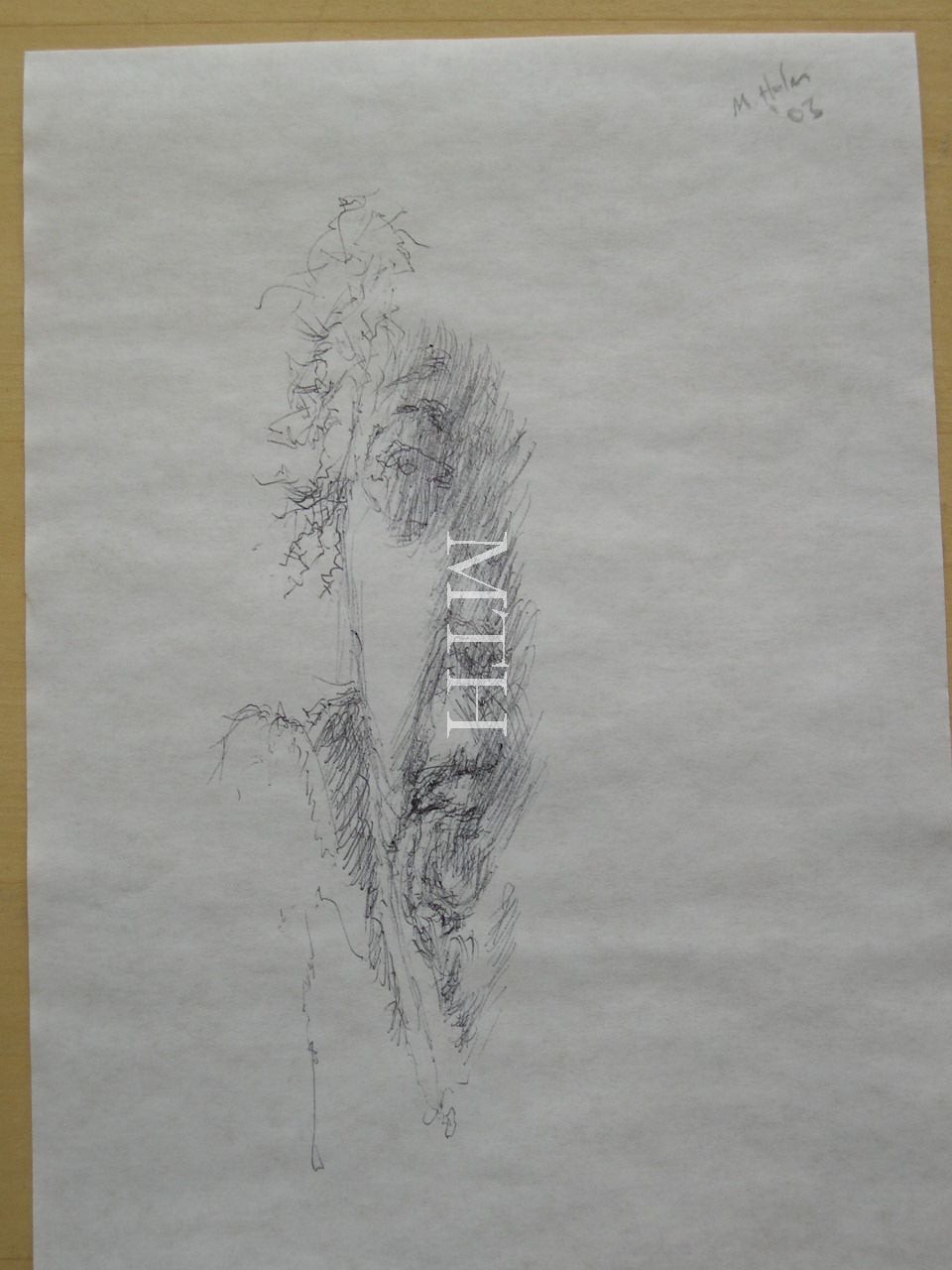 This piece was done not long before Mary's death. It was sketched on a small piece of scrap paper, and was done in ink. The subject is obviously one of age and death, illness and depression. Only half of the face is shown, and it gives the impression of almost a sense of disappearance, or of fading. Mary sketched this between hospital trips. Just approaching a subject matter like this would turn most artists back. Documenting one's own demise and capturing a mood shows again Mary's freedom as an artist.

The face is almost elongated to capture the emotion and the hair is wild and undone. This is as raw as one can get. The nakedness of death stares us in the face. 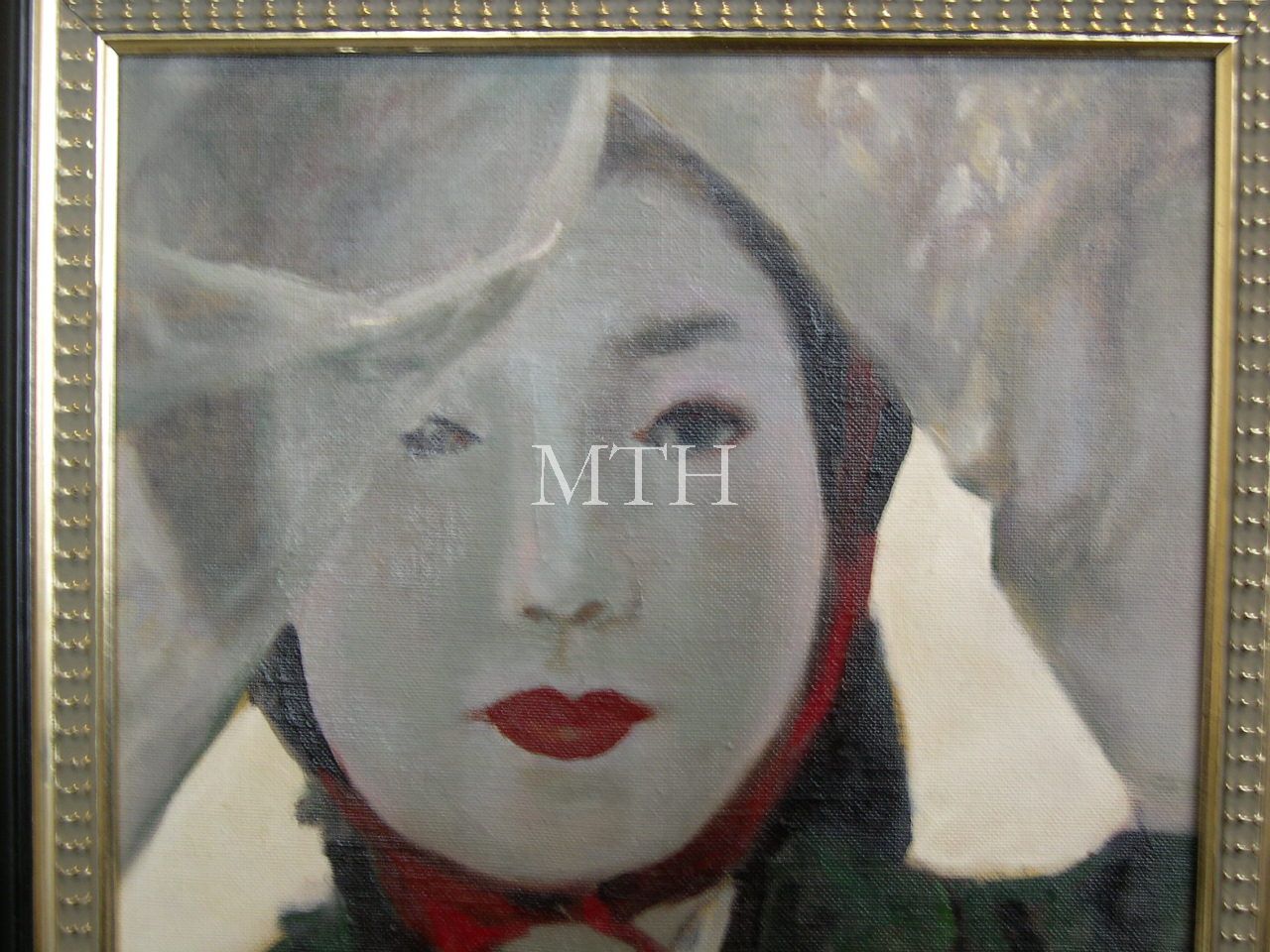 In this oil we see a Japanese Geisha. She is parting a curtain with an unseen hand and coming toward the viewer. One feels motion and a real presence of the figure here. The subject is involving the viewer in the action. The closeness of the figure and the confining area of the canvas add to the focus. 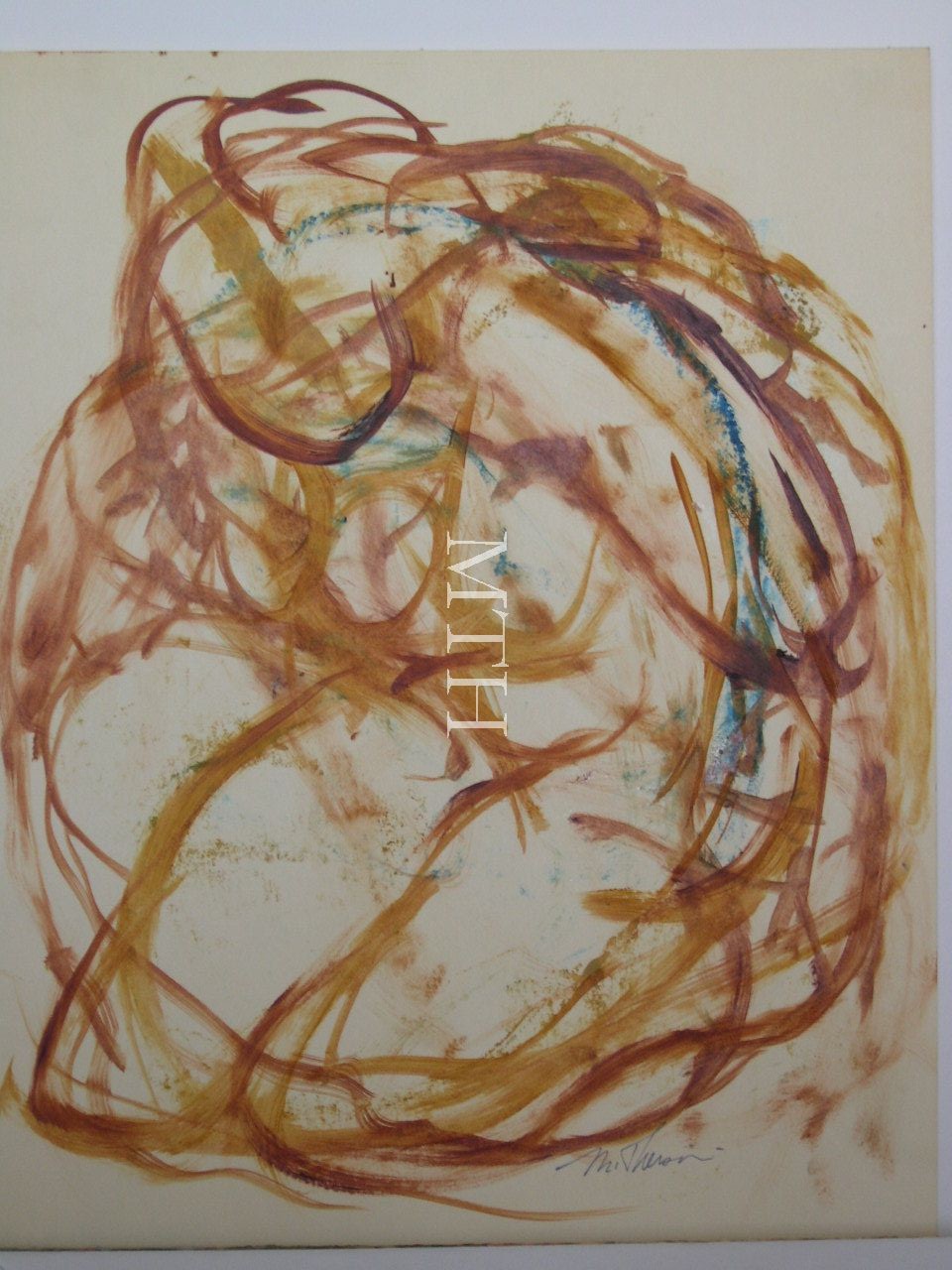 Here is an interesting minimalist treatment of the female form. Mere brush strokes are used in their rawest form to outline the figure. Once again we see a freedom in work that is bold. The color choices of hinted blues is interesting too. The use of the color really offsets the work and makes it come alive. 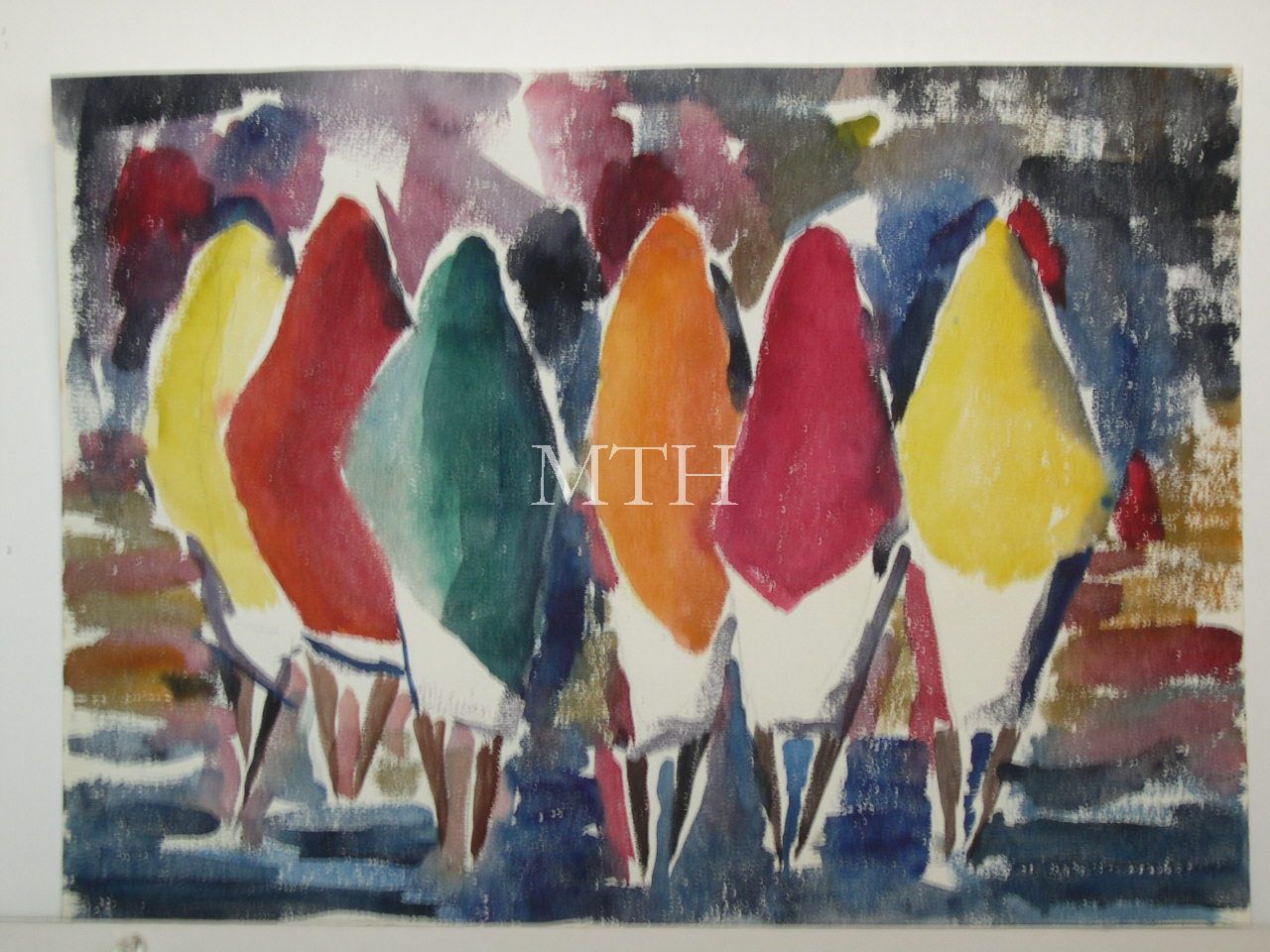 In this watercolor we see bold use of simple primary colors. The work shows six women wearing long head scarves. The women seem to be part of a procession or gathering. Other figures are hinted at but left vague in order to allow the true star of the piece to come to the forefront; the colored scarves themselves. Note the uses of light in the treatment of the scarves. 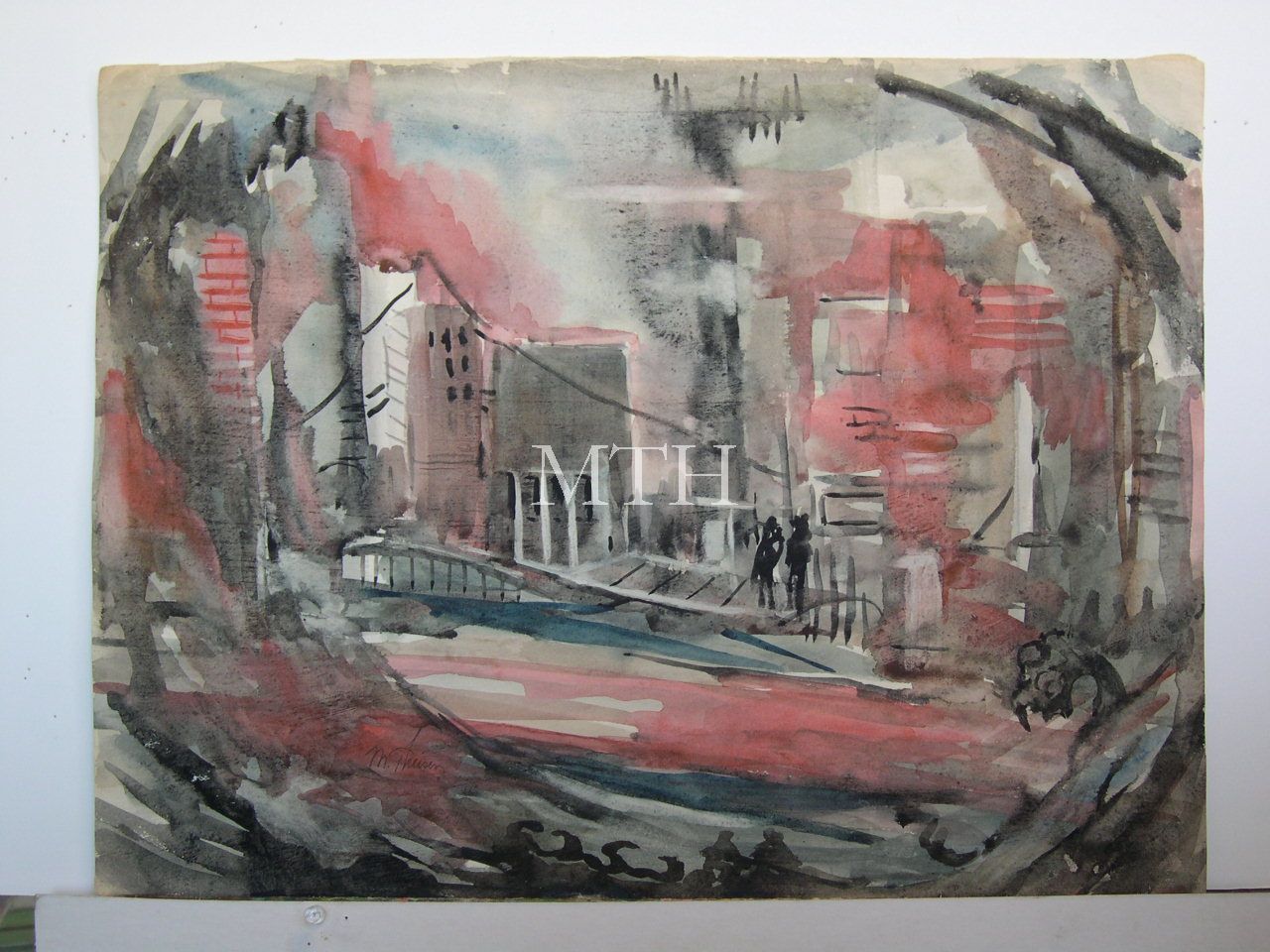 In this watercolor we see a surreal scene of fire and destruction. Ashes and smoke cover the immediate foreground and the center is dominated by two figures who may be firefighters or now homeless victims. Masonry and buildings are just hinted at in an obscured manner. This painting commemorates the fire in Milwaukee's third ward. The fire occurred on October 28th 1892 and destroyed sixteen square blocks and over 400 buildings. Mary documented some of the unique architecture in the third ward in her paintings. All of the residential areas of the third ward on the north end were demolished to make way for a freeway. 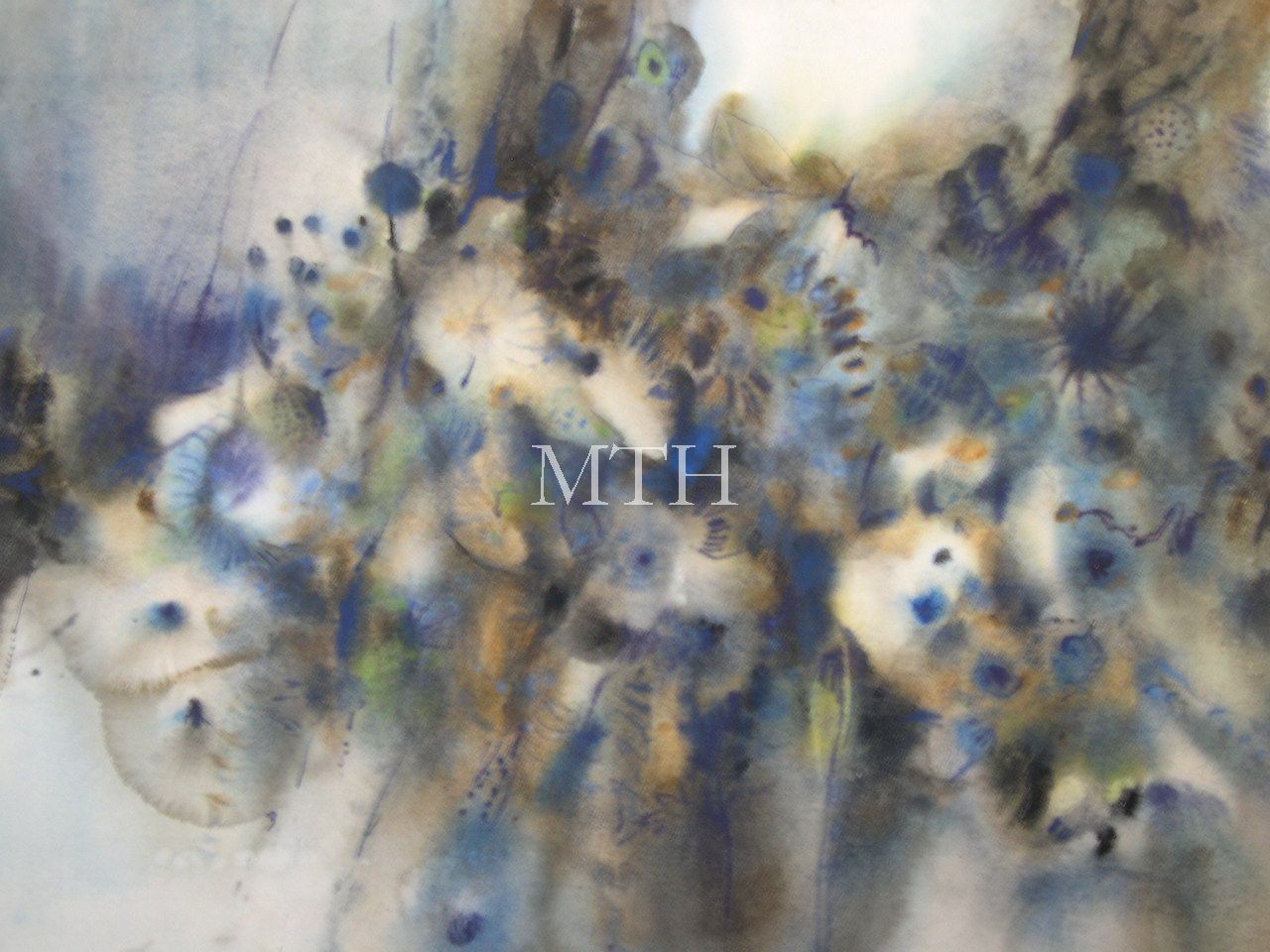 Here is a good representation of a style of abstract Mary commonly used. it could be called "forms". The subject matter may be underwater, weeds, autumn, etc. What is in common is usually a wet style of watercolor and abstractions of plant "forms". In this work I can imagine jellyfish, urchins, etc. To another viewer it may suggest something different entirely. Mary was at her most free and creative in these abstractions in my opinion. 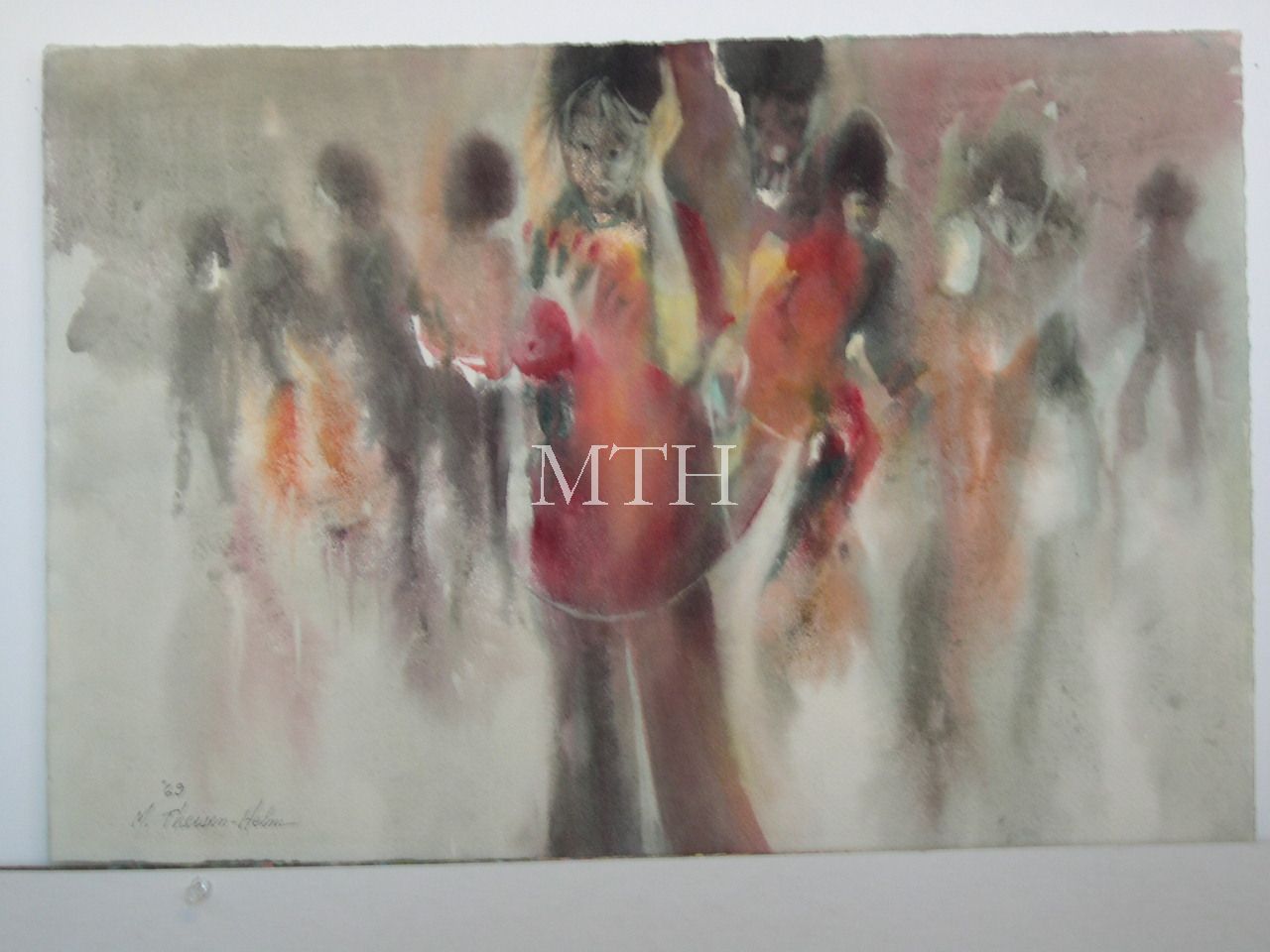 In this watercolor entitled "Vietnam" wee see an abstracted line of refugees in motion. Smoke and fire are hinted at and obscure the figures. This work was done in 1969, when the horrors of war were interrupting the otherwise quiet dinner hour in America on a nightly basis through television. The figure that is dominant is holding her head in her hands, an expression of fear and anxiety on her face. This piece may have been influenced by the famous photo of the naked child running from a napalm attack. This piece was very appropriately done as an abstract. It would lose the power it has if everything were detailed and spelled out. 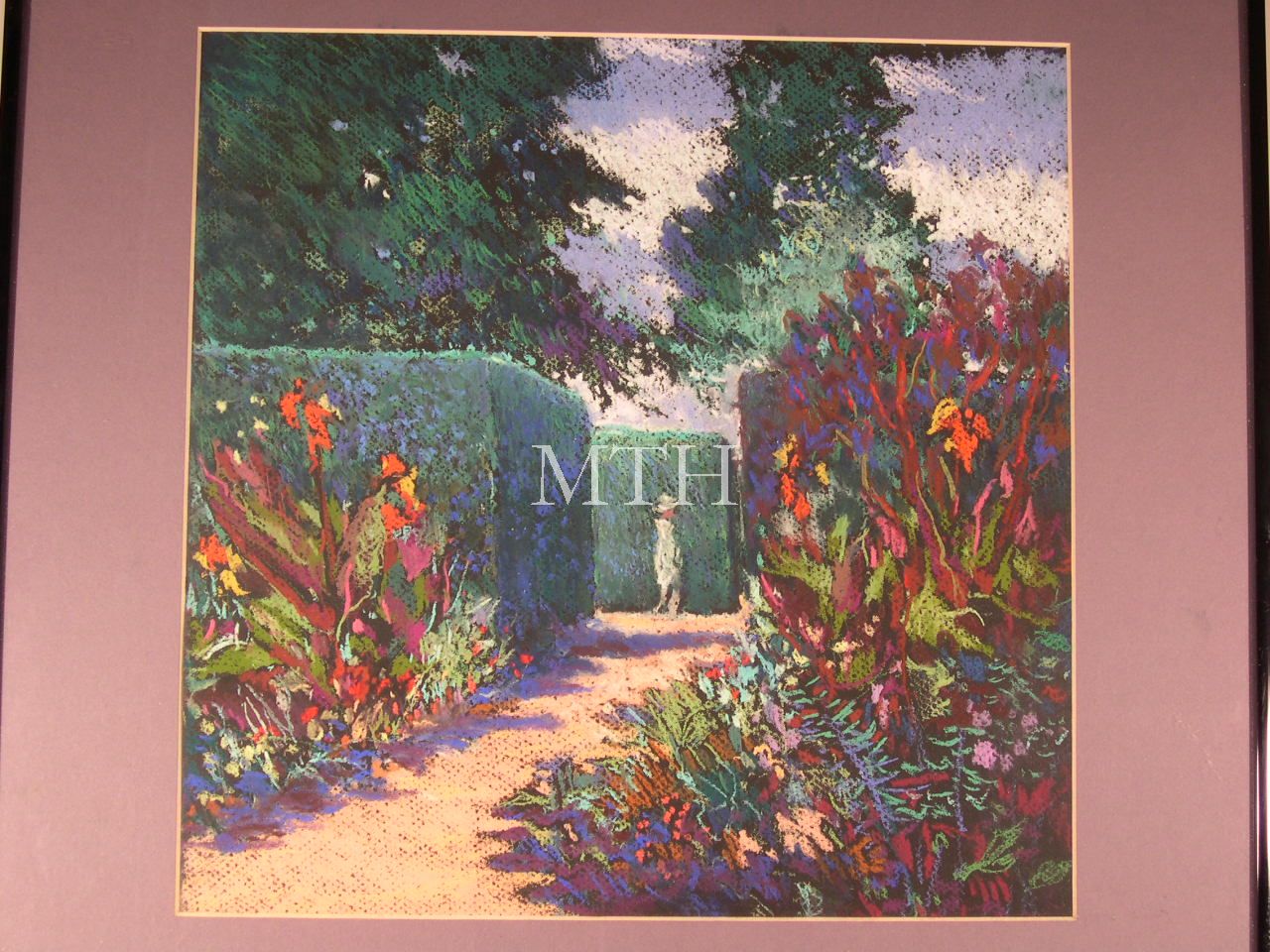 In this pastel Mary shows a different lighter side, capturing the sculpted gardens of the Boerner Botanical Center in Whitnall Park, Milwaukee. Vividly jumping out from the hedges are the hues of blooms of every color. A lone figure is at center. This piece can lose the viewer in time. Is it 1990 or 1890? Note the use of blue on the hedges depicting light bouncing from leaves. The scene is so vibrant that even the shadows are filled with color. 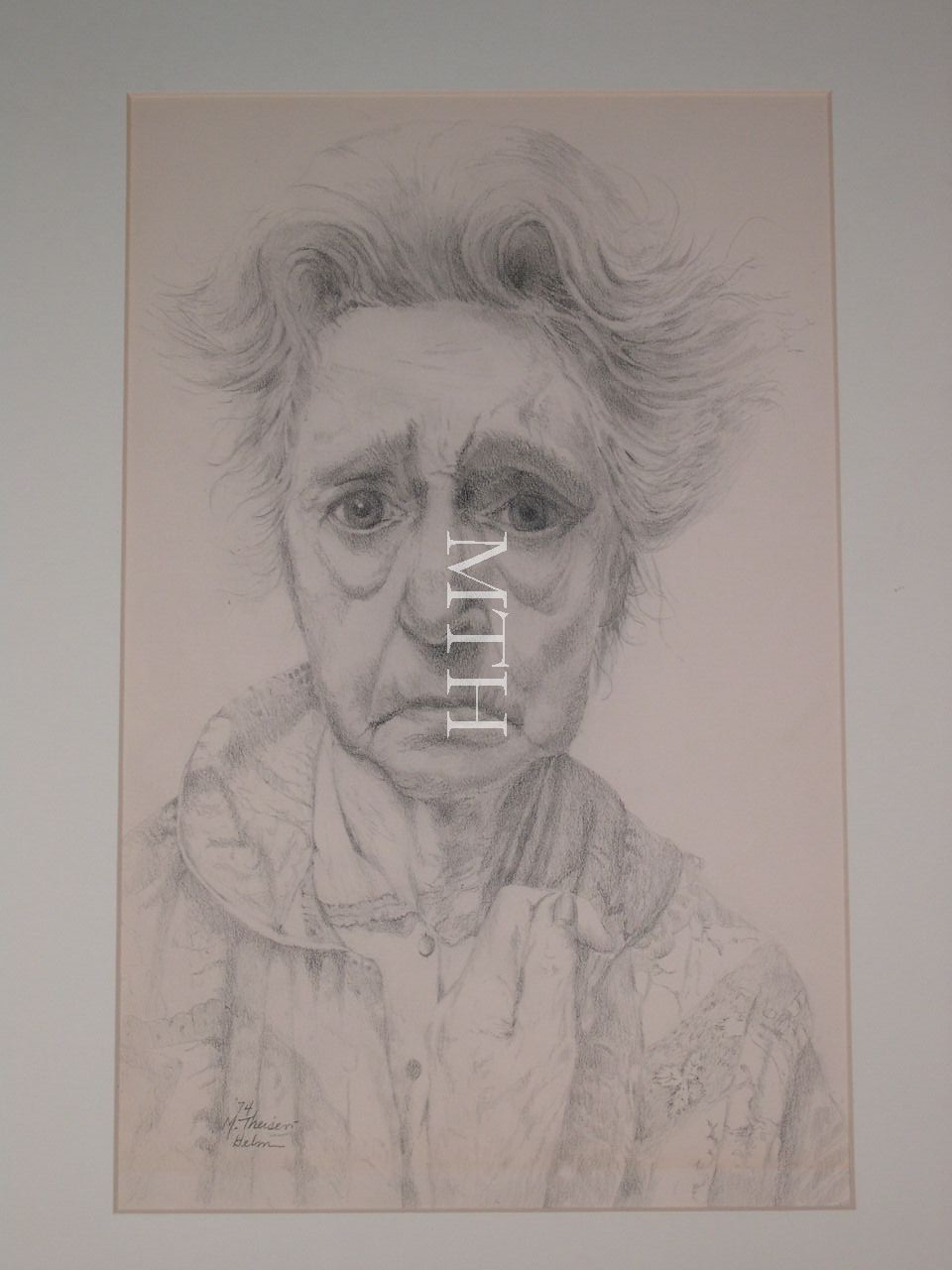 Here we see a very detailed pencil sketch of an elderly lady. The face and eyes speak of fatigue, sadness, and time. The hand is bent with arthritis. Time has taken it's toll. The woman is dressed in a bed gown which looks to be permanent attire. This is realism in a painful way. It slaps us in the face as if saying time will make dust of even the mountains. Look closely, because society shuts these faces and realities away behind institutional doors. This woman seems to be impelling us to help her. She seems to be telling us "Don't shut me away". The work was painted in 1974 when Mary was only in her early 50's. It certainly shows a certain sensitivity. 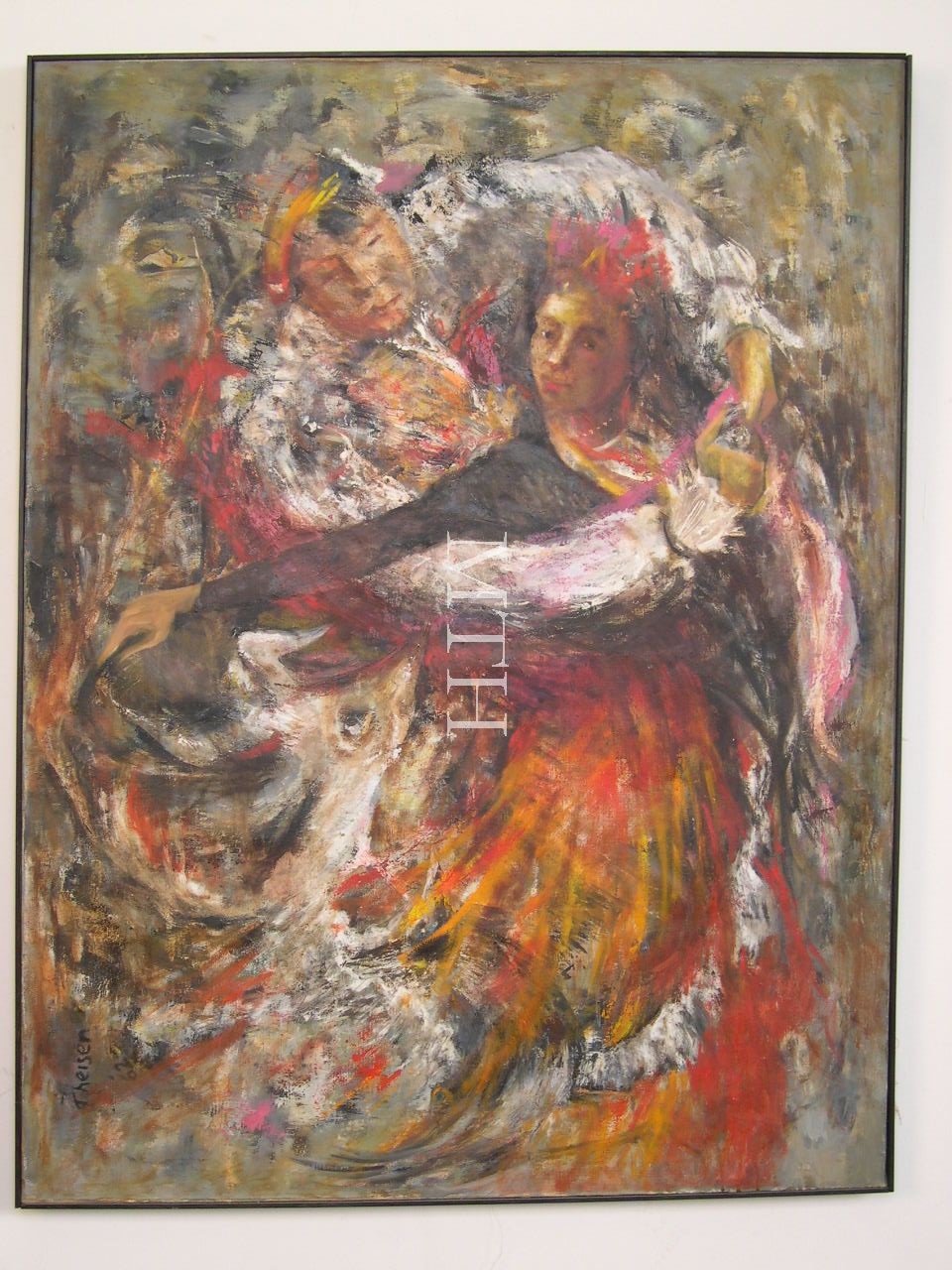 This large oil painting from 1962 is entitled "The Dance". It oozes motion in a swirling waltz of imagination. The woman is embraced by the man and is looking at the viewer directly. She has one arm outstretched in a balletic pose. It is exotic. It could be set in Spain, Italy, Mexico... It is not an aristocratic dance, but a dance of the peasantry or commoner, and filled with passion. Courtly dances in contrast seem clinical and precise. The woman's dress seems to shimmer in colors as she twirls. An object with an apparent eye crouches between the couple looking up at them..a dog, calf, ? 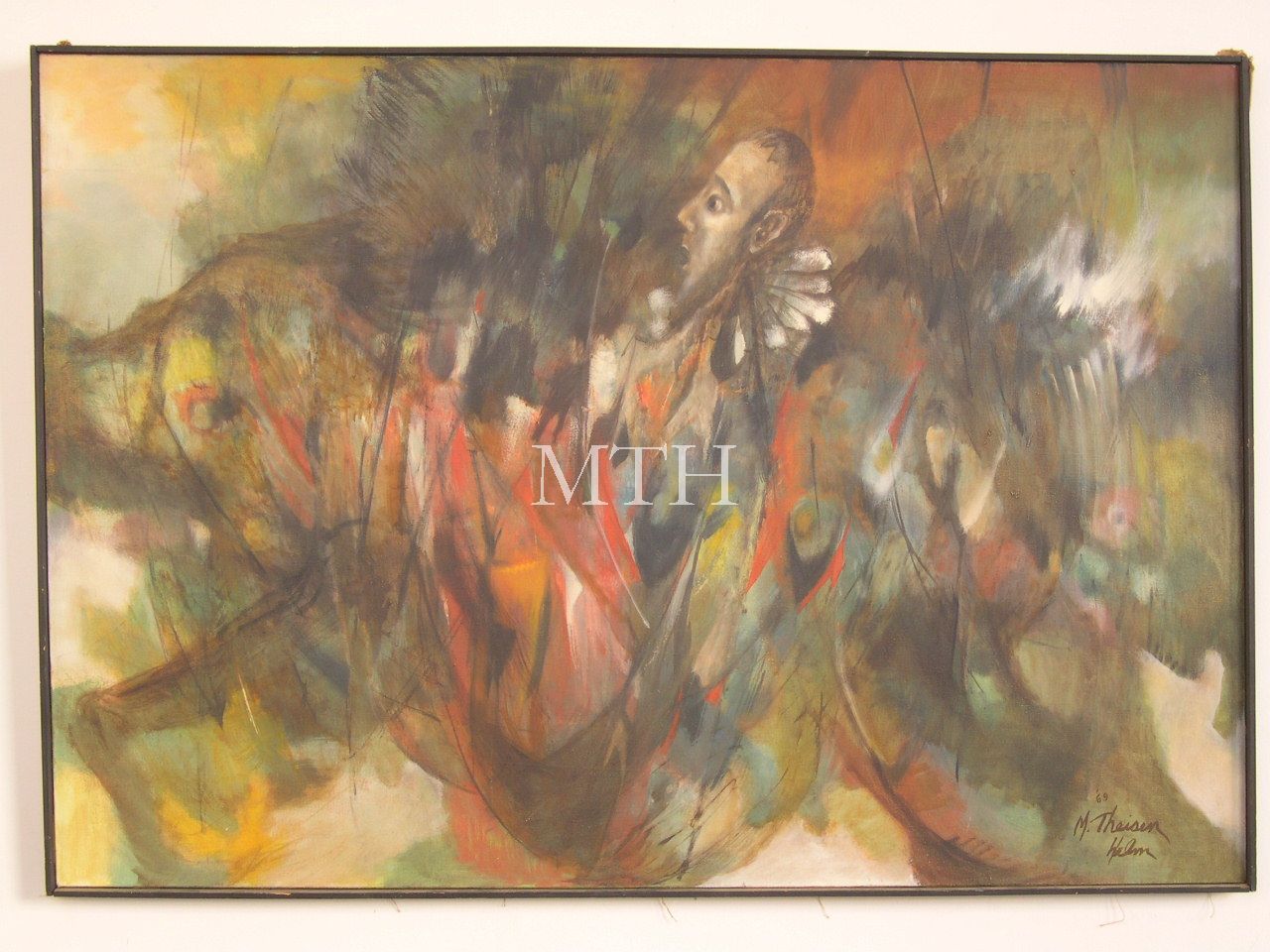 This large oil painting shows Don Quixote on his horse. The treatment is abstract except the face which with mouth open is exclaiming or shouting at the world.

To quote Don Lewis of the Milwaukee Journal in 1970, " 'Don Quixote' one of the most powerful and successful works in the show... The knight of the windmills is beautifully depicted among the dreams with which he surrounded himself, his hauntingly expressive face shining like a beacon in the sea of make believe." 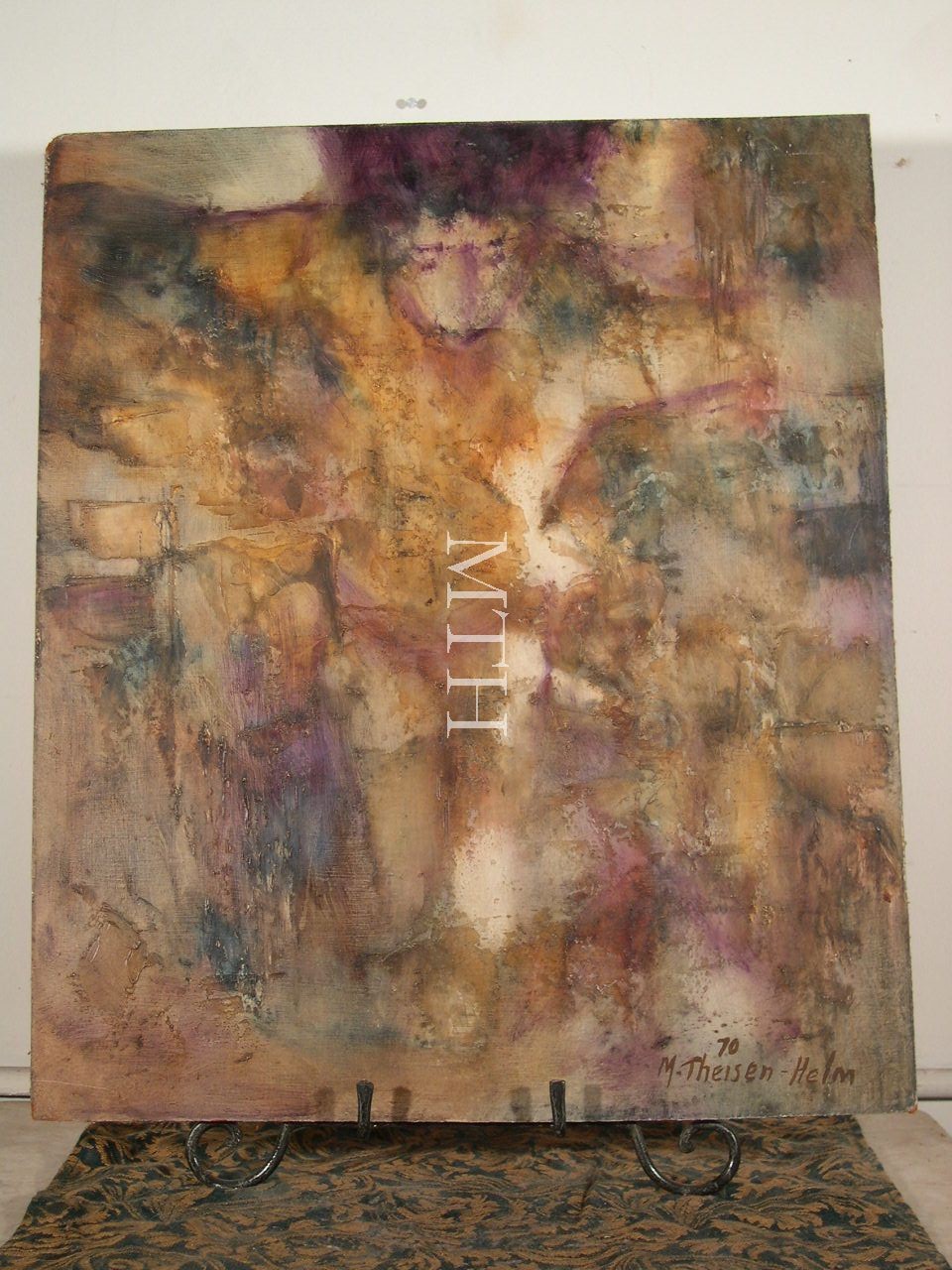 Another abstract, this work came alive to me when I was photographing it. It lay in a pile of figure studies and unfinished works under a table. Unless one looks closely at it it looks like a simple a raw somber color abstraction. When I set it up to be photographed the true subject matter started to emerge. The piece is an abstract of Christ crucified . The paint was applied with both pallet knife and brush. Light on the right side of the figure sketched the form and helps him emerge. 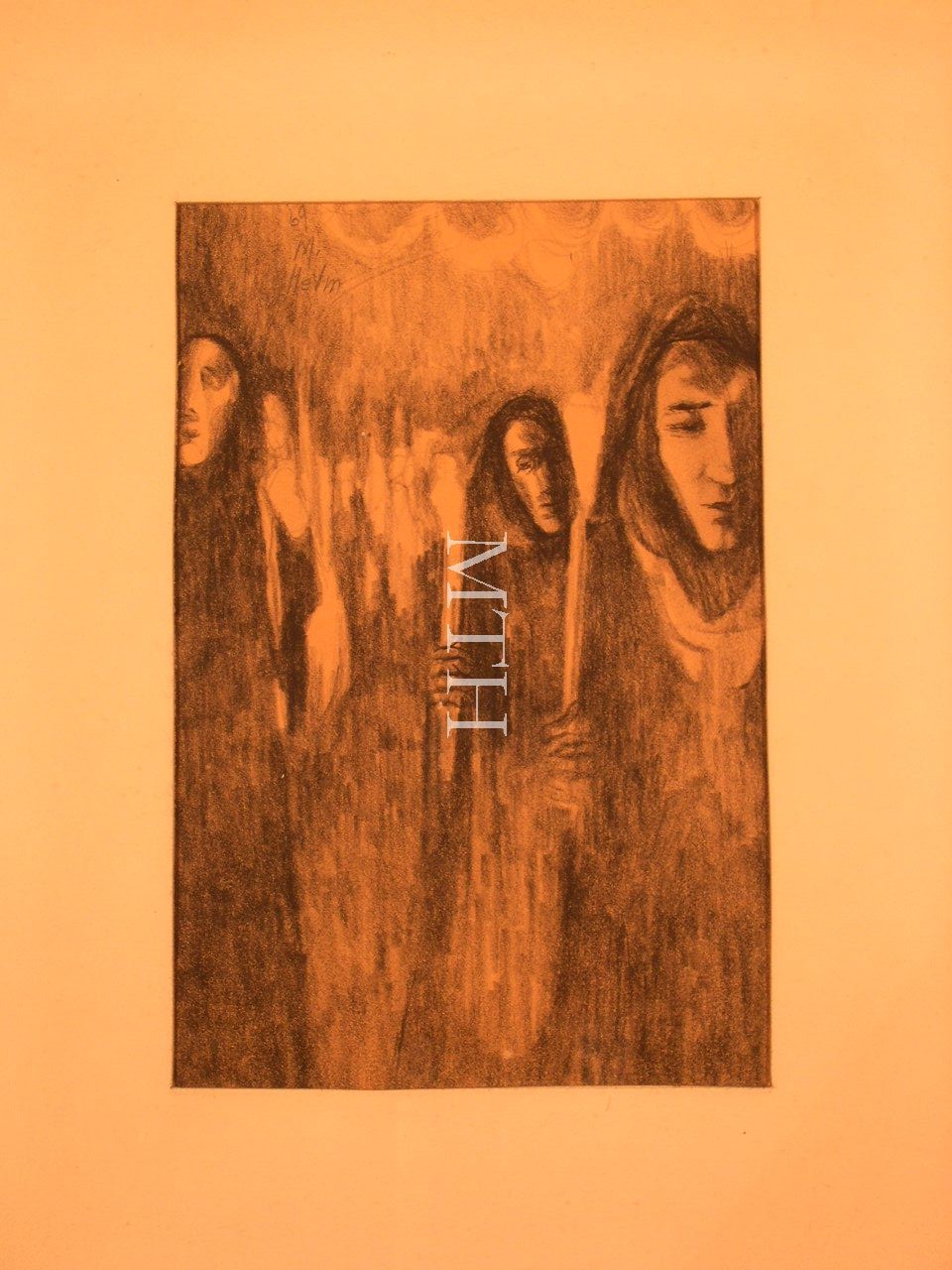 This is a pencil sketch from 1969. It shows a procession of thin waxen and almost goulish figures wearing robes and bearing torches.Where they are going is left up to the imagination of the viewer. The right forefront face is detailed, but the others are left almost mask-like giving the piece a little grotesque coloring.